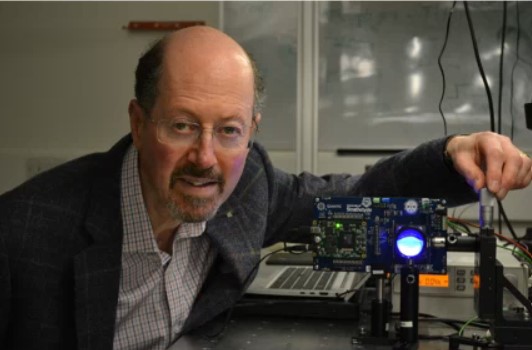 QuantIC co-investigator Professor Martin Dawson from the University of Strathclyde has been elected a Fellow of the Royal Society (FRS).

Professor Martin Dawson, Director of Research at Strathclyde’s Institute of Photonics and a valued member of QuantIC, the UK Quantum Technology Hub in Quantum Enhanced Imaging, has received the accolade in recognition of a research career of more than 30 years, in which he has become a leading international figure in his field.

Professor Dawson specialises in micro-LEDs (micro-sized light-emitting diodes), semiconductor materials and microfabrication, optoelectronic device development, and laser technology. He has also been involved in the formation and technical development of a number of spinout businesses.

Professor Dawson joins a group of around 1700 Fellows. Each year, up to 52 Fellows and up to 10 Foreign Members are elected from a pool of around 800 candidates, who are proposed by the existing Fellowship.

Professor Dawson said: “I am truly delighted and greatly honoured to have been elected a Fellow of the Royal Society, the world’s oldest independent scientific academy and a learned society of the very highest prestige.

“My election owes much to the unique opportunities and major support that the University of Strathclyde has given me over more than 25 years, in particular through my roles in the Institute of Photonics, the Department of Physics and Fraunhofer UK. I am grateful to all my colleagues who have made this such a creative and productive place in which to work.”
Sir Adrian Smith, President of the Royal Society said: “It is an honour to welcome so many outstanding researchers from around the world into the Fellowship of the Royal Society.

“Through their careers so far, these researchers have helped further our understanding of human disease, biodiversity loss and the origins of the universe. I am also pleased to see so many new Fellows working in areas likely to have a transformative impact on our society over this century, from new materials and energy technologies to synthetic biology and artificial intelligence. I look forward to seeing what great things they will achieve in the years ahead.”

Professor Dawson joined the University of Strathclyde in 1996 and was instrumental in establishing the Institute of Photonics that year. He has published more than 900 journal and conference papers in the course of his career.

Professor Dawson was awarded two international prizes in 2021 - the Global SSL Award of Outstanding Achievement by the International SSL (solid state lighting) Alliance (ISA), and Optica’s Nick Holonyak Jr Award. He was also awarded the 2016 Gabor Medal and Prize by the Institute of Physics and the 2016 Aron Kressel Award by the IEEE Photonics Society.

ABOUT QUANTIC
QuantIC’s mission is to bring together industry and academia in a collaborative venture to revolutionise imaging across industrial, consumer and scientific markets. This is done by facilitating industry and academic collaborations through a £4m Partnership Resource Fund and developing global talent and the pipeline of quantum physicists and engineers.