Researchers at QuantIC have adapted widely-available technology found in smartphones to make a small, low cost ultra-sensitive gravimeter for the first time. Named "Wee-g", the device uses the same mass produced micro-electromechanical systems (MEMs) which are used in  smartphones' internal accelorometers and uses a silicon spring ten times thinner than a human hair which has allowed it to detect very small changes in gravity.This offers a wide range of applications, including volcano monitoring, environmental surveying and oil exploration.

In their paper, "Measurement of the Earth tides with a MEMS gravimeter" published in Nature today, QuantIC's Dr Giles Hammond, Richard Middlemiss, Antonio Samarelli, Professors Doug Paul, Jim Hough and Sheila Rowan explain how their research and development led to Wee-g being the first device able to measure the Earth Tides because of its incredible stability and how this potentially could positively impact industry.Co-author Richard Middlemiss said, “There are a lot of potential industrial applications for gravimeters, but their cost and bulkiness have made them impractical in many situations. Wee-g opens up the possibility of making gravity measurement a much more realistic proposition for all kinds of industries: gravity surveys for geophysical exploration could be carried out with drones instead of planes; and networks of MEMS gravimeters could be places around volcanoes to monitor the intrusion of magma that occurs before an eruption – acting as an early warning system." Potential industry sectors where Wee-g’s technology could deliver a competitive advantage include oil and gas exploration, civil engineering, environmental monitoring and volcanology, navigation, aerospace and security and defence. 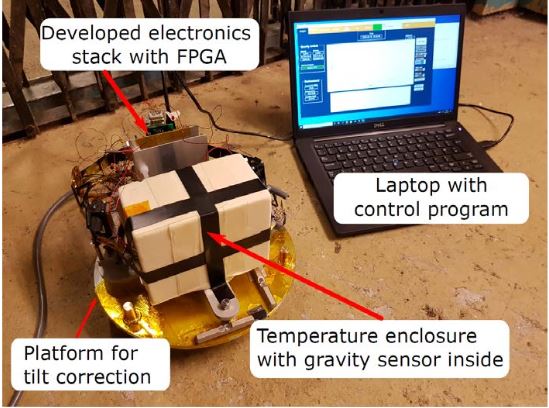 The team is currently working to make Wee-g even smaller and more portable and are keen to build on industrial partnerships to exploit the device commercially. QuantIC also has a Partnership Resource Fund to support industry led projects on Wee-g. For more information, please contact QuantIC's Business Development Manager, Dr Michael Fletcher.

The paper, titled ‘Measurement of the Earth tides with a MEMS gravimeter’ is published in Nature and is available here.